Parish of the Holy Communion, also known as the Church of the Frescoes, exists as a witness to God’s grace. We offer a welcoming environment in order to serve each other and those in our wider community with gratitude and generosity, recognizing the gifts of those present among us as we continue to grow in our faith and commitment to Jesus Christ.
WE BELIEVE, walking in the path of Jesus, that we are called to respect and welcome the diversity of both our congregation and our local community. We are called to be attentive to the needs and strengths of all, affirming that each person brings beauty and unique gifts that reveal God’s goodness.
WE WORSHIP in an orderly, participatory manner in common with Episcopal/Anglican churches everywhere. We are a congregation, not an audience. Our worship is varied and reverent, yet somewhat informal. We use musical and liturgical resources, traditional and contemporary, with language that is inclusive of all persons. Our worship calls and directs us to service, to go in peace to love and serve the world and each other.
WE SERVE and support one another with prayers, visits, and contributions in times of need. Mindful of the needs of our community, we offer hands-on service and financial support of agencies in Ashe Co and internationally. We serve the world at large through the 24/7 ministry of the frescoes inviting people to discover the presence of God, attracting visitors and pilgrims from around the world. 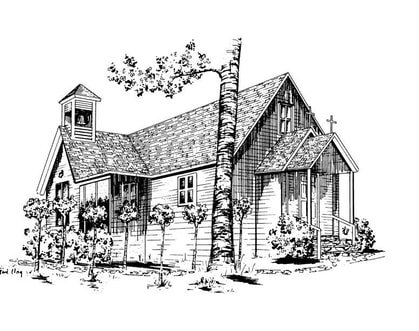 ​ The Episcopal Parish of the Holy Communion has a long history in Ashe County and enjoys a unique situation among Episcopal parishes: it is comprised of two churches, St. Mary’s in West Jefferson and Holy Trinity in Glendale Springs, and these churches contain world-famous art works. In the late 1800’s Episcopal missionaries came to this region to provide schooling and medical help for the people living there. Holy Trinity Episcopal Church was built in Glendale Springs in 1901 and St. Mary’s Episcopal Church was built in 1905 near West Jefferson. Episcopal missionaries from Valle Crucis held services at various locations in Ashe County as early as 1852, but no continuing presence of the Episcopal Church existed until 1895 when 19 candidates were presented for confirmation. St. Mary’s church was originally called the Church of St. Simon the Zealot, but its name was changed to St. Mary’s in 1903. The construction on the present St. Mary’s was begun in 1905 with consecration of the completed church in 1906. In 1900, construction started on a church on 12 donated acres in Venus, now Glendale Springs and was a mission of St. Paul’s of Wilkesboro. The Mission House was built in 1913, housing a school tended by women missionaries from the Episcopal Church Army. From 1934 until 1971 the Episcopal Church was served by priests whose primary responsibilities were elsewhere. The Rev. Faulton Hodge became priest-in-charge at St. Mary’s in 1972. Not only did Father Hodge bring new life to this small church, but his interest in art also led to a meeting with Ben Long and to Long’s creating his first full wall frescoes which have, over the years, made these two churches famous and an attraction for thousands of visitors annually. Since Father Hodge retired in 1986 the Parish has been served by The Reverend Robert Crewdson, The Reverend Steve Miller and The Reverend Kimberly Becker. The Reverend Steve Sedgwick currently serves as our Interim Rector